Bhagiratha hoping to bring Ganga down, he left for Gokarna for performing penance, leaving the kingdom in the hands of his ministers.

Narada questioned the four Kumaras thus, "O worshipable ones, can a ghost also achieve liberation by listening to Srimad Bhagavatam?" The Kumaras replied, "O Narada, every category of living entity in the eight million four hundred thousands types of bodies and even ghosts can achieve liberation just by hearing Srimad Bhagavatam." To help illustrate their statement the Kumaras narrated the following history:

On the bank of the Tungabhadra River lived a Brahmana named Atmadeva. He was well versed in the scriptures and had all good qualities required for achieving liberation from this world.

His wife's name was Dhundhuli and she was very cunning, arrogant and barren. Atmadeva was very gentle by nature and did not interfere with anything Dhundhuli did, but he was in anxiety because they were childless.

One day, without informing his wife, Atmadeva went to a forest where he met a swami whose face was filled with vigor. Atmadeva revealed to him that he had no children and the swami wanted to help him. The swami extended his mercy saying, "No one can remove what is written in their luck, but everyone should endeavor for their fulfillment." The swami then gave a piece of fruit to Atmadeva and said, "This fruit is generative and is infallible, if your wife eats this fruit she will surely become pregnant." When Atmadeva returned home he gave this piece of fruit to his wife and revealed the quality of this special fruit, but Dhundhuli, being unprincipled by nature, did not eat the fruit but instead fed it to their cow. A few days later Dhundhuli's sister came to visit her and told her she was pregnant. Dhundhuli told her sister the history of the special fruit and that she did not want to take a pregnancy to term, so she fed the fruit to their cow. Dhundhuli then requested her sister to give up her newly born child for monetary compensation and her sister being poor, agreed to the transaction. Atmadeva was unaware of this covert scheme. The Sastra (ancient scripture) states that the luck of a man can be foretold through astrology, but what a cunning woman will do next cannot be foretold even by the creator of the universe, Lord Brahma. But well mannered ladies are glorified in the scriptures because they act properly at every step.

Dhundhuli named her boy Dhundhukari; and because the cow's offspring appeared human but had cow-like ears, Atmadeva named him Gokarna (for having ears resembling that of a cow's). During the children's upbringing, Dhundhukari did not learn anything in school, whereas Gokarna learned all the scriptures properly in a short time. When Dhundhukari reached youth, he was rowdy and mischievous, whereas Gokarna was very gentle and well mannered. Dhundhukari would daily engage with prostitutes, eat meat, took intoxication, stole, gambled, engaged in criminal acts, set fire to others' houses, and kept the company of unwanted people. Seeing the undesirable acts of his son, Atmadeva became very morose and by the advice of Gokarna, left for the forest to perform austerity.

Gokarna thought living with such a mischievous person is not good, so he left to visit places of pilgrimage. With his father and Gokarna gone, Dhundhukari squandered all the wealth of the house on prostitutes and then beat his mother for want of more money. But being unable to supply money to Dhundhukari, Dhundhuli committed suicide by jumping into a nearby well. Now Dhundhukari was free to do as he liked. Therefore he daily went to the forest and killed animals to bring home to eat and brought five prostitutes to live in the house. In order to fulfill the prostitutes' demands he would gamble, commit robbery, and engage in many other illegal activities. For a normal man it can be difficult to fulfill the demands of one wife, therefore one can only imagine how much anxiety Dhundhukari was in to have to provide for five prostitutes. One day the prostitutes had a discussion and concluded that some day Dhundhukari will be caught by constables for robbing people, and when he is interrogated they will also be implicated and punished. Therefore they decided to kill Dhundhukari. One day when he was asleep, four of the prostitutes strangled him with a rope while the fifth one poured burning red hot charcoal into his mouth, killing him. The prostitutes then collected all the remaining wealth and left the house. Dhundhukari, being a very sinful person and having received such an untimely death, became a ghost and haunted the house. After some time Gokarna returned from pilgrimage and being tired, fell asleep in the house. In his ghostly existence, Dhundhukari made many disturbing noises, which disturbed Gokarna's sleep. Gokarna then understood that the sinner Dhundhukari had died untimely and had become a ghost. A genuine devotee only thinks of benefiting others; thus Gokarna being a genuine devotee decided to liberate the ghost (Dhundhukari) from that existence.
Gokurna then embarks on a deep dhyan (meditation) to Surya Deva (Sun God) to learn how to address this. 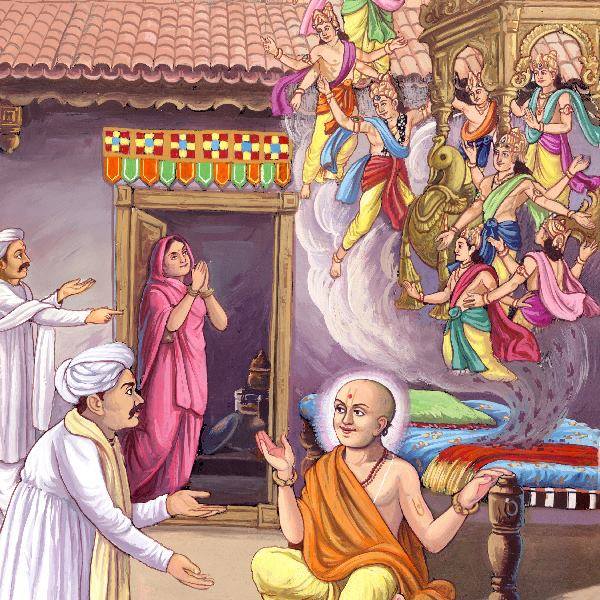 The Sun God advices him to recite the Srimad Bhagavatham

To liberate the ghost from that existence, Gokarna decided to recite Srimad Bhagavatam in seven days in that house. He invited the local residents to attend and informed them that Dhundhukari had become a ghost. The local residents accepted the invitation and the recitation of Bhagavatam began on Asadha Sukla Navami day (which takes place in light part of June-July). Gokarna got a seven-knotted bamboo and erected it before the seat he would recite Bhagavatam from so that the ghost (Dhundhukari) could sit upon the tip and listen to the Bhagavatam narration (per the scriptures a ghost can only sit upon a bamboo and no where else).

After the first day of narration was complete, the first knot of the bamboo cracked, which indicated that Dhundhukari was getting closer to liberation. Day after day the knots cracked until the seventh knot cracked, indicating that Dhundhukari had become free from that ghostly existence. Then a celestial Vimana aircraft arrived from the spiritual world to take him there. Upon seeing the spiritual Vimana aircraft, Gokarna asked the aircraft attendants, "Why have you brought only one aircraft? Other people have heard the Srimad Bhagavatam narration as well. Why haven't you brought Vimana for them?" To this the aircraft attendants replied, "Even though the others have heard Srimad Bhagavatam, they did not develop sufficient faith as Dhundhukari has and they did not accept the ideals of Bhagavatam. After hearing Bhagavatam they remained fixed in their ways. Except for Dhundhukari, no one genuinely adopted the path of Srimad Bhagavatam, which is why only Dhundhukari is qualified to be liberated at this time. Only Krsna is the Supreme God, Lord of all the Lords, and no one other than Him is God. He is the ultimate well-wisher of all. Anyone who does not accept this absolute truth will never be benefited in life. Those who do not accept scriptural instructions and those who do not accept the Supremacy of Lord Krsna cannot be liberated from this world even though they are religious and/or are practicing spiritual life."

Upon hearing the Vimana attendants words, Gokarna again recited Srimad Bhagavatam, by hearing which all the listeners developed unshakable faith in Lord Krsna and concluded that He is the Supreme God; that glorifying the Lord and chanting His name is the sole goal of every human being; and that every living entity is His servant. With this firm faith and by Gokarna's mercy, another Vimana came from the spiritual world and took everyone there to live eternally. 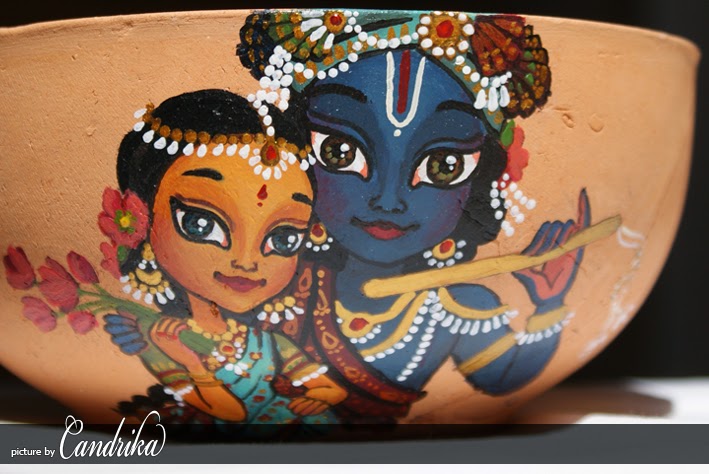 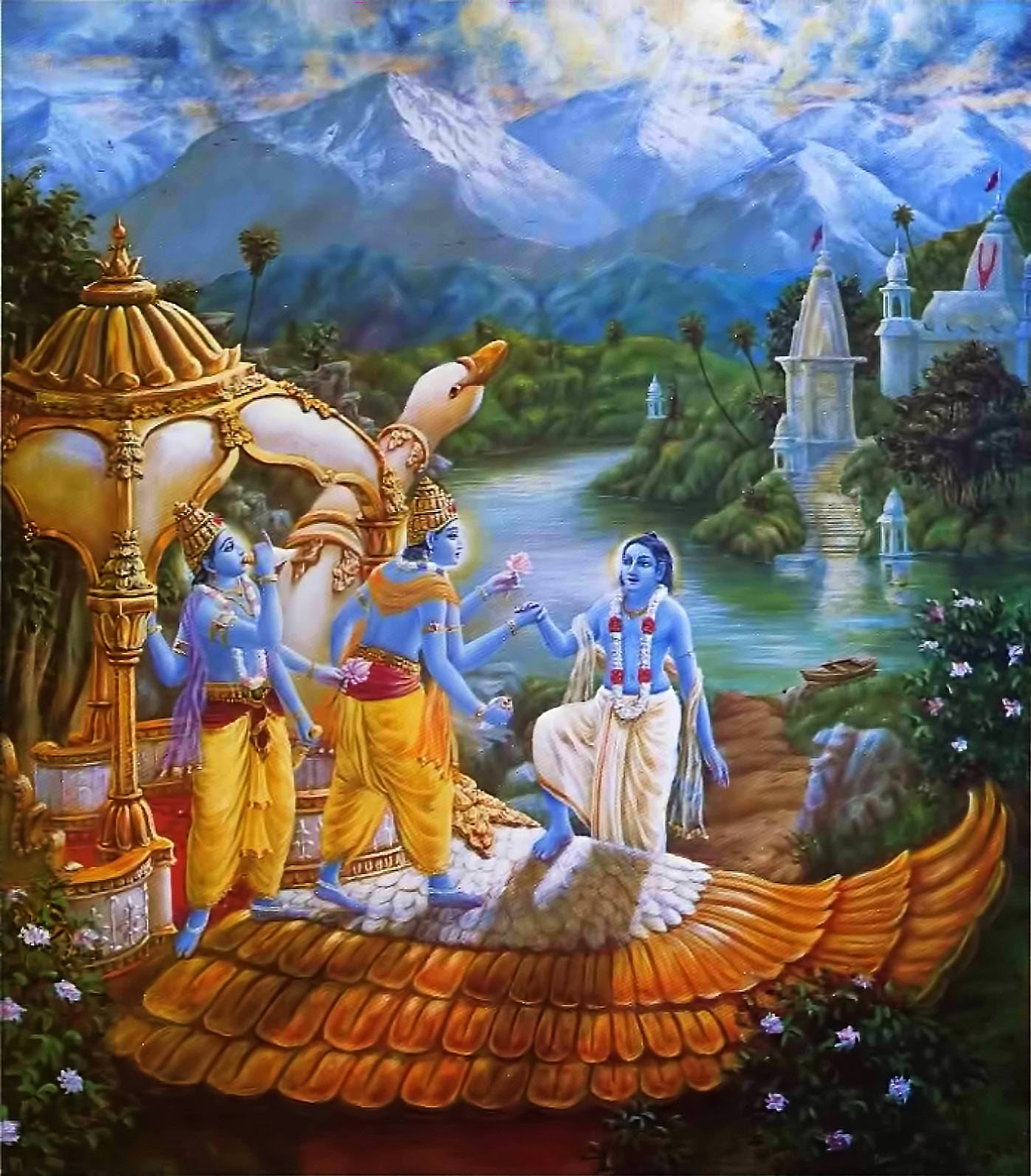 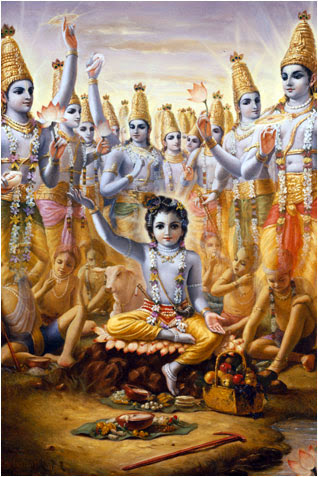 Email ThisBlogThis!Share to TwitterShare to FacebookShare to Pinterest
Labels: Gokarna